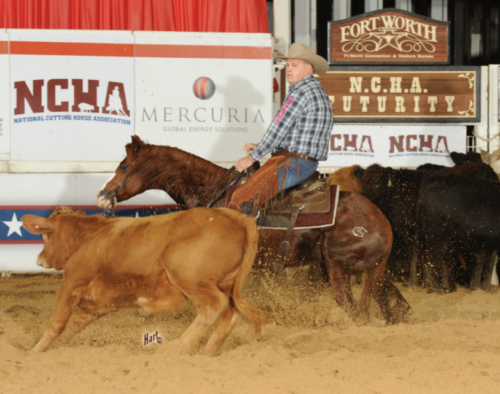 Colt Ventures would like to congratulate Lew Hall and rider Austin Shepard on their success at the 2016 NCHA Futurity with Sir Long Legs, sired by High Brow Cat, the 2016 NCHA Futurity Open Reserve Champion! After finishing in the top five of the composite scores, Austin and Sir Long Legs placed second i the semis with a 222. In the finals, the two were the first pair out and marked another 222 to hold the lead until the middle of the second set.

High Brow Cat also had two other Open finalists at the Futurity this year. Geronimos Cattilac, by High Brow Cat, proved his epic style and consistency when he doubled up in the Non-Pro and the Open with owner Glade Knight and trainer Tate Bennett. Glade finished third in in the Non-Pro on him with a 220. Bennett cut to a 218.5 in the semis on Geronimos Cattilac and while the two didn’t fair well in the Open finals, we are sure they will be ones to watch in 2017!

A Reymarkable Cat, also by High Brow Cat, was ridden by Dave Stewart to make the Open finals. He is owned by Roger Turner of Midland, Texas. They had some tough luck in the finals, but will definitely be contenders for next year’s 4-year-old competitions!

We want congratulate all of the riders and owners of these horses! Thank you to everyone for continuing to support our program!