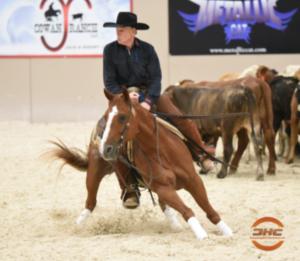 $5,000 Novice-Non Pro Reserve World Champion CP Jesse Cat, by High Brow Cat and out of Jessies Starlight MS by Grays Starlight. Owned by Tommy and Susan Marvin of Barnsdall, Oklahoma, the stallion scored a total average of 439.5 and ended the year with earnings of $29,762 and lifetime earnings of $123,722. Ridden by Susan, the chestnut was also the 2015 AQHA Level 2 Cutting Reserve World Champion.

In third, was Clays Little Kit Cat, owned by Dawn C. and John Chapman of Chandler, Ariz. The gelding sired by High Brow Cat and out Clays Little Kit by Zack T Wood earned a year-end total of $27,489.

Clays Little Kit Cat returned to take third place, as well in the $5,000 Novice Division under the hand of Mike Wood of Scottsdale, Arizona. Wood and Clays Little Kit Cat had an outstanding World Finals, scoring the highest overall cumulative score of 442.5 to earn a total of $3,712 at the World Championships, bringing their year-end total to $38,378.

High Brow Cat also offers its congratulations to good friend Joe Howard Williamson of Weatherford, Texas, taking his fourth Non Pro World Championship aboard Sweet Little Cats, owned by his daughter Denver Barnett. Though Williamson rode a total of five horses, Sweet Little Cats, by Sweet Little CD and out of CD Olena, was his choice for the World Finals. “He’s got a world of eye appeal,” Williamson told Brett Hoffman of the Fort Worth Star Telegram. “This level of cutting here is as tough as it gets and for a six-year-old horse, he’s really exceptional.”

Williamson and Sweet Little Cats, who also won the NCHA Non Pro Mercuria World Series event at the All American Quarter Horse Congress, scored a total of 850.5 in the Finals, earnings $8,931 to bring their year-end total to $99,444. The stallion has lifetime earnings of $183,601.