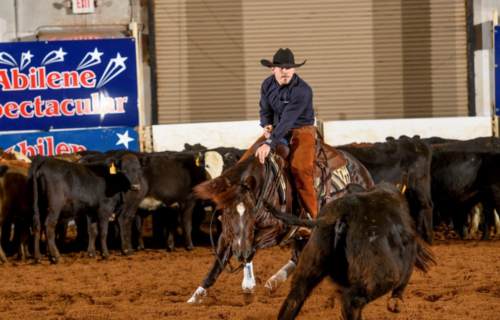 It’s a brand New Year, and horses sired by High Brow Cat haven’t wasted any time jumping in the winner’s circle! The Abilene Spectacular stamped for the first major aged event of the season and it crowned One Alley Cat, by High Brow Cat, the Open Derby Champion.

Ridden by Cullen Chartier, the horse also known as “Hercules,” marked a 219 in the first go and followed up with a 218.5 in the second. The pair bested the 32-horse field in the Open finals by 3 points with a 223 to take home the Championship and $31,000! They also won the Novice class for an addition $4,800. One Alley Cat is out of Nod N Smile Baby by One Time Pepto and is owned by professional golfer Tom Watson and his wife Hilary. We caught up with Cullen after his win to chat about “Hercules.”

Best of luck to this team as they continue on in 2018!

Also making an appearance in the Open 4-Year-Old finals in Abilene was “Little Jo” and Pedro Ornelas. The horse that became a favorite at the 2017 NCHA Futurity with his long list of success during the event. Pedro and the horse finished in the top 10 of the 4-Year-Old Open with a 218.5 winning the Limited Open. They also picked up a Reserve in the Gelding division. Little Jo Cat is nearing the $100,000 mark in the first month of his 4-year-old year!

Christina Huntley dominated the 5/6 Amateur competition in Abilene when she won with a 6-point lead! She rode HR Cats Starlight, by High Brow Cat, to a 221 for the victory! They pocketed $4,000 and the title as well as another $1,909 for the Gelding division.

We are ecstatic about all of the talented horses sired by High Brow Cat that will be hitting the show pen this year. As always, if you are showing a “Cat” this year, don’t be shy! Tag us, email us, call us… we want to hear about your success!