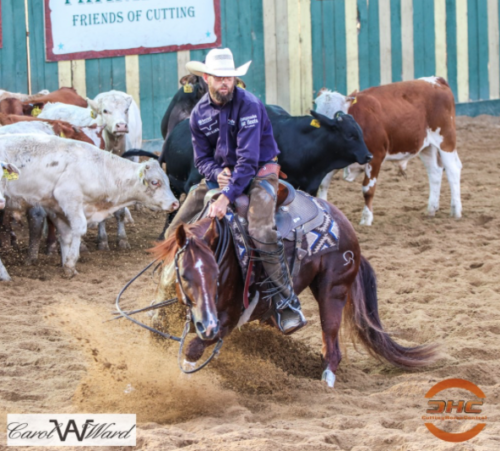 The 2017 El Rancho Futurity concluded on Sept. 17, and we are so pleased to congratulate TWO big winners sired by High Brow Cat!

The Open Futurity Championship was claimed by Coyote Rock Ranch’s Cindy Lou Blue, a 3-year-old mare sired by High Brow Cat! “Gaga,” as they call her, is out of the great mare, Swingin Star Pepto, by Peptoboonsmal, that is now owned by Coyote Rock Rock. She and Andrew Coates marked a 221 in the finals for the $12,500 winner’s check after also winning the second go-round with a 222! Click here to see the run and listen to what Andrew had to say about this great mare in an interview with our friends at Cutting Horse Central.

Also on the list of big wins for Cat in El Rancho was the mare Eazee E, owned by Tatum and Kylie Rice. Tatum and the mare, who have been head-to-head all year in the NCHA Mercuria Open World standings, caught up to the No.1 spot after winning the Open finals in El Rancho with an astounding 228-point run that paid $13,124! This puts the mare’s earnings for the year at more than $92,000 and more than $163,000 in lifetime earnings. Eazee E, better known as “Zee,” is a 7-year-old mare that is out of Zee Dualy. Click HERE to watch the run and hear what Tatum had to say about this incredible horse. Best of luck to the Rice family as they continue 2017 in pursuit of the coveted NCHA World Championship title!